A future version of the iMac may take a more radical form, with Apple considering a redesign of the all-in-one desktop so it effectively exists as a single sheet of curved glass with an embedded display.

The iMac is one of the many iconic devices designed by Apple, with the all-in-one Mac consisting of a thin display housing the main components and a small stand to hold the display at eye-level for the user. While the design has received refinements over the years to make the main screen section thinner and sleeker, Apple is also mulling over making a more striking change to its design.

In a newly granted patent called “Electronic Device with Glass Housing Member,” Apple explores the boundaries of the iMac by proposing one that is effectively formed from a single sheet of glass.

In its basic form, says the patent, the Mac would consist of the sheet with a curved lower portion on one edge, which resides on the desk is used to hold input devices, and a larger flat area which would include the embedded display. The glass would form the main support structure for holding the display in place, affixed to the backside of the glass, and could feasibly include a connection for an iSight camera in its usual place above the screen. 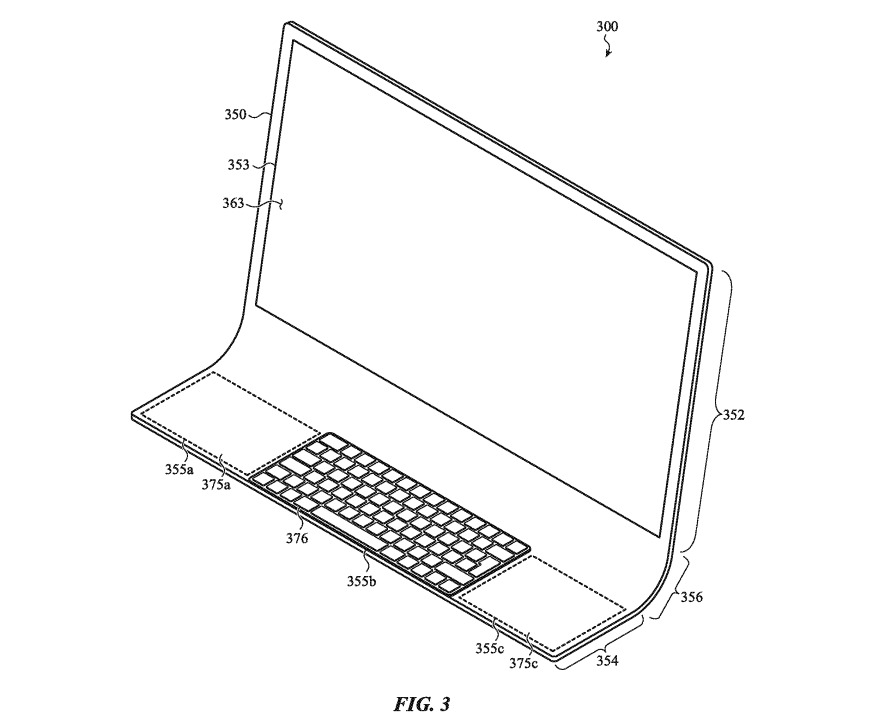 As it would be a single piece, the curved lip would not be enough to keep the glass upright for normal use. To solve this, Apple proposes the use of a wedge section that props up the glass, slotting to fit the curved section between the lower lip and the main upper panel.

Rather than just acting as a prop, the wedge could have sufficient volume to house components, such as ports for network connections, peripherals, and power. Doing this could take some of the weight of components away from the display, and in turn the glass, and give the wedge more weight for stability.

The angle of the glass could be adjusted by shifting its position against the wedge, seating it in a higher position or lower, depending on the user’s preference.

Examples of the rear wedge concept and the hole, which could accept a MacBook’s keyboard section

To aid in its configurability, Apple has also proposed the curve of the glass itself could be adjusted in certain scenarios. Flattening the curve could make the Mac easier for packing or transportation, though it could also be folded up for an even smaller footprint for storage.

Another version switches out the single glass sheet for two panels that overlap at the curve, with the wedge helping hold the vertical glass in place while the lower lip rests against the assembly. Some versions could even switch out the wedge for a separate flat panel, which could hinge out when required.

While the lower section could be used simply as a place to put peripherals, such as a keyboard or mouse, Apple has further designs on its usage. An addition of a slot in the curved section could allow keyboards to be slid through it, possibly from the wedge element. 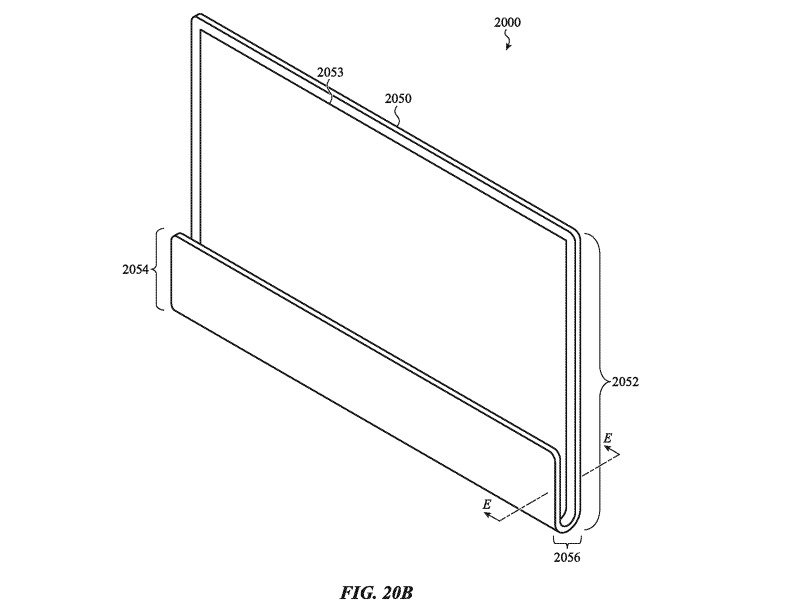 Another use for the slot could be for feeding the keyboard section of a MacBook through, so the keys could be used while the display of the MacBook outputs to the version in the glass, as if functioning as a docking system.

There is also the suggestion the glass lip could actually embed a keyboard into it, possibly taking advantage of ideas brought up in other glass keyboard patent applications.

Apple is awarded numerous patents every year, but a patent only indicates areas of interest for Apple’s research and development efforts. It does not guarantee the concepts described will appear in a future product or service.

Hendren is a product designer for Apple in the Macintosh Architecture Group, who has previously worked on in-key capacitive touch sensors for MacBooks.

Wang, a product design architect, has previously worked on fingertip and face mapping tools for VR and AR applications, and the design for a shape-changing Apple Pencil.

Garelli is a senior product design engineer for core integration architecture. Previously he worked on a solar-powered MacBook with a two-sided display.

A senior manager for product design at Apple, Degner has worked on the iMac Pro, MacBook Pro, and iPad Pro lines. To their name is a patent application that allows iPhones and iPads to be turned into a fully-fledged touchscreen notebook.

Product design architecture senior director Ligtenberg has previously come up with a plug-insertion guidance system for desktops, to help with plugging in cables and accessories for hard-to-see ports, such as on the back of an iMac.

Mathew is a director of product design at Apple, and was co-named on the in-key capacitive touch sensor patent, among others.

Shining some light on Apple’s True Tone and Night Shift