As Facebook saw its share of advertising revenues drop to 28% of the market after the launch of App Tracking Transparency in iOS 14, Apple’s own ad share rose to 15%.

Advertisers have already said Apple’s ad sales team is benefiting from the company’s privacy features. Plus it’s been reported that Apple is looking to almost double its number of ad sales staff, even as the rest of the firm slows down recruitment. 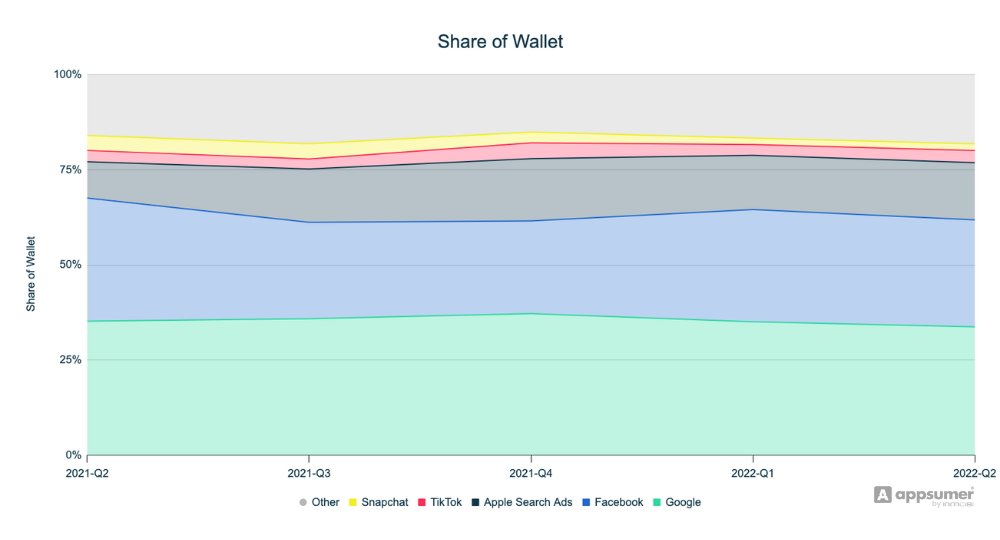 Appsumer also tracked what is described as “share of wallet.” This is the amount that a current customer spends regularly on one particular firm, rather than always shopping around.

The report notes, though, that “Meta also recovered share-of-wallet when comparing Q4 21 to Q2 22,” and suggests that this means the company is “starting to recover from initial ATT headwinds.”

There is also an issue of how Apple can continue to grow its advertising business when it is chiefly limited to search ads. This is an issue because opportunities for advertising sales are constrained because they depend on showing ads only when a user searches the App Store.

“ASA is constrained in inventory by search volume on the App Store,” says Appsumer. “However, it’s worth keeping an eye on rumors that Apple could soon be launching their own [demand-side platform], which would provide more inventory with the benefits of Apple’s first-party data for targeting and measurement.”

This would give Apple more potential spaces for adverts, and with advertisers having to bid to get those slots, is likely to be highly profitable. A separate report recently predicted that by 2025, Apple’s advertising business could rise to $6 billion from the estimated few hundred million dollars in the late 2010s.