Tomorrow is the big day if you are a fan of Samsung’s foldable Galaxy Z series. The next generation of Wear OS-powered Galaxy watches is also on the way as is a new pair of TWS buds. Despite Samsung not being big on teasers, numerous leaks mean that we have a pretty clear picture of what to expect.

The base design for the Samsung Galaxy Z Fold4 remains the same, though the aspect ratio is expected to shift to make both displays shorter and wider. That means 23:9 for the cover display and 6:5 for the main display (compared to 24.5:9 and 6.2:5 on the Fold3). That could be a major usability boost for those who found the cover display too tall to reach its top or too narrow to type comfortably on. Also, the bezels will be smaller. 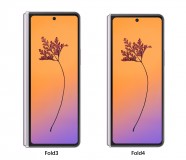 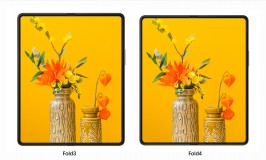 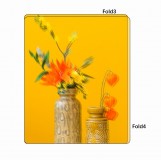 There’s more. Samsung apparently redesigned the hinge to make the crease smaller. Whether that means that it will close flat or not is not entirely clear. Further leaks show that Samsung has made the under display camera less visible by increasing the pixel density in the display area over it. The new displays will apparently use new materials – Super UTG inside and Victus+ outside. 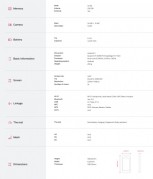 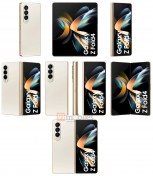 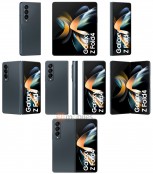 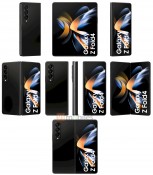 The phone will be powered by the Snapdragon 8+ Gen 1, of course. It will be paired with 12GB of RAM and 256GB or 512GB storage. There should be a 128GB version too, though that wasn’t available at either the carrier or Amazon. But the rumored 1TB version is almost certainly not happening.

The phone’s battery capacity is expected to remain the same, rated at 4,400mAh, and the phone is probably sticking to the 25W charging system. However, a tweaked charge curve is said to speed things up – half an hour of charging will take a flat battery to 50%, instead of just 33% as on the previous model.

The Samsung Galaxy Z Fold4 is expected to cost roughly the same as its predecessor. One retailer listed the 256GB model at €1,846 and the 512GB one at just under €2,000. Here is a price comparison table. The Z Fold4 will be available in Beige, Black and Gray Green, Burgundy Red too.

The displays of the Samsung Galaxy Z Flip4 will stick to the measurements of the previous model. That means a 6.7” internal display with 1,080 x 2,640px resolution. Some rumors claimed that the cover display will be larger (2.1”), though the latest information suggests that it will stick to the original 1.9”.

The leak from the Bosnian carrier also showed that the two cameras besides the cover display will stick to using 12MP senors (both for the wide and ultra wide lenses). The selfie camera is staying at 10MP.

The Z Flip4 could feature a new hinge and screen materials too, but live photos show that there will still be a gap between the two halves when the phone is closed. 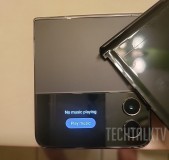 And the Z Flip4 will use the more efficient Snapdragon 8+ Gen 1 chipset. This could bring about improved battery life, which will be much appreciated. The larger battery may be paired with a jump to 25W charging (up from 15W), while wireless charging will probably remain the same at 10W.

A leak from Samsung Care+ UK confirmed that there will be a Bespoke edition, allowing users to customize the colors of the Galaxy Z Flip4. Those aside, there should be a new Bora Purple color (more on that in a bit), Blue, Graphite and Pink Gold. 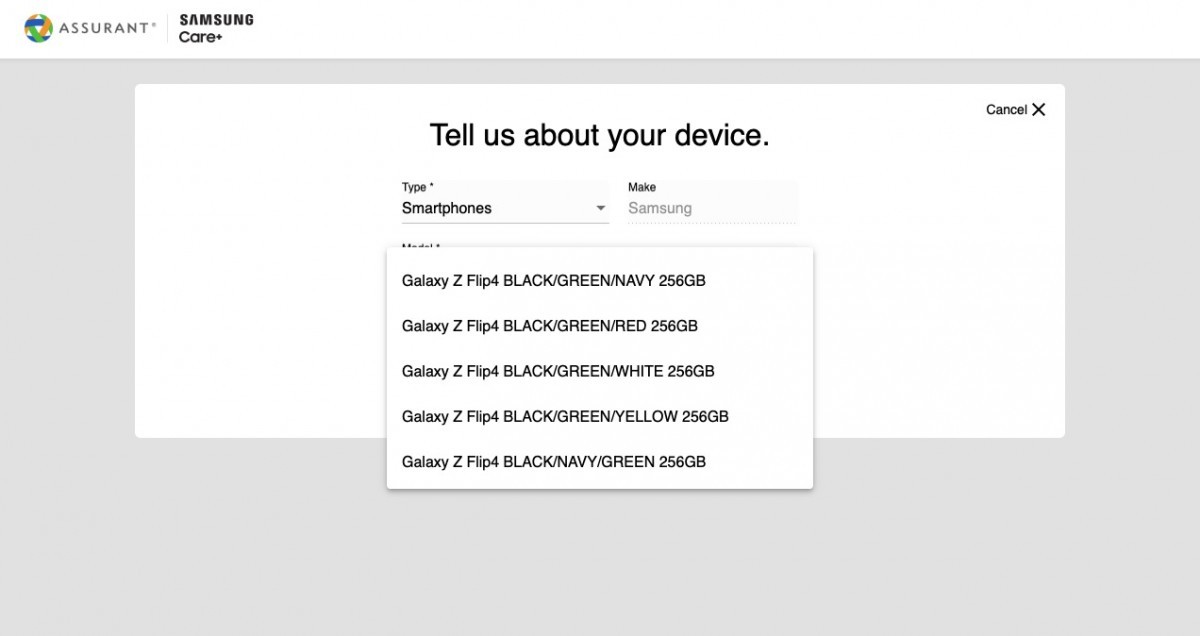 Before moving on to the other new devices, here are some images of cases for the Samsung Galaxy Z Flip4 and Z Fold4.

Cases for the Galaxy Z Flip4 and Z Fold4

Pro watch incoming, rotating bezels are a thing of the past

Samsung is expected to launch three Galaxy Watch5 models, two vanilla ones measuring 40mm and 44mm and a Watch5 Pro at 45mm. Leaked official renders confirmed what was rumored months ago – there will be no rotating bezel. If there is a “Galaxy Watch5 Classic”, it will not launch tomorrow.

Both Watch5 models will apparently switch away from Gorilla Glass in favor of Sapphire Crystal. They will be rated for 5ATM water resistance and will have GPS on board (those two things are not really surprising, of course).

The Samsung Galaxy Watch5 will have slightly larger batteries – 276mAh on the 40mm model and 397mAh on the 44mm one, up 29mAh and 36mAh compared to the respective Watch4 models. The Watch5 Pro will have an even larger 572mAh battery. Judging by certifications of the new wireless charger, the watches will charge faster at 10W.

The new models will arrive with the latest Wear OS 3.5 and One UI Watch 4.5. Updates include a new QWERTY keyboard, support for Bluetooth calling with dual-SIM phones, new accessibility options and more.

The Watch5 series will launch with the latest One UI Watch 4.5 (based on Wear OS 3.5)

Finally, let’s talk connectivity and pricing. The Samsung Galaxy Watch5 40mm Bluetooth-only model will retail for €300, the one with LTE will be €350. Going up to the 44mm size, the prices should be €350 for the Bluetooth one and €400 for the LTE one. Compared to the Watch4 equivalents, that is a €30/50 price hike.

Finally, the Samsung Galaxy Watch5 Pro will be available only in 45mm size and it will cost €490 if you don’t want LTE connectivity or €540 if you do. Either way, you’re looking at a higher price tag than the Watch4 Classic had at launch.

Leaked data shows that the Samsung Galaxy Buds2 Pro will have 10mm drivers and 5.3mm tweeters (vs. 11mm and 6.5mm on the original Buds Pro). Audio will be carried over Bluetooth 5.3, 360 Audio will be supported as before.

Multiple mics on the buds will enable “Intelligent Active Noise Cancellation”, squashing 33dB worth of noise (a huge improvement over the 20dB of the previous Buds Pro). The mics will provide high quality HD voice pickup.

The Galaxy Buds2 Pro will boast IPX water resistance, meaning they can survive submersion down to 1m underwater for half an hour. Battery life is about the same with 8 hours of play time with ANC off and 29 hours total with the charging case (which will accept power over USB-C or wirelessly). Putting the Buds back in their case for 5 minutes will give you 55 minutes of listening time.

The new Bora Purple version of the Samsung Galaxy S22 will go on sale tomorrow, August 10. Only the small S22 is getting the new color as far as we know (and as you may have noticed, the Buds2 Pro have a matching colorway). The Bora Purple S22 will set you back €850/$800. 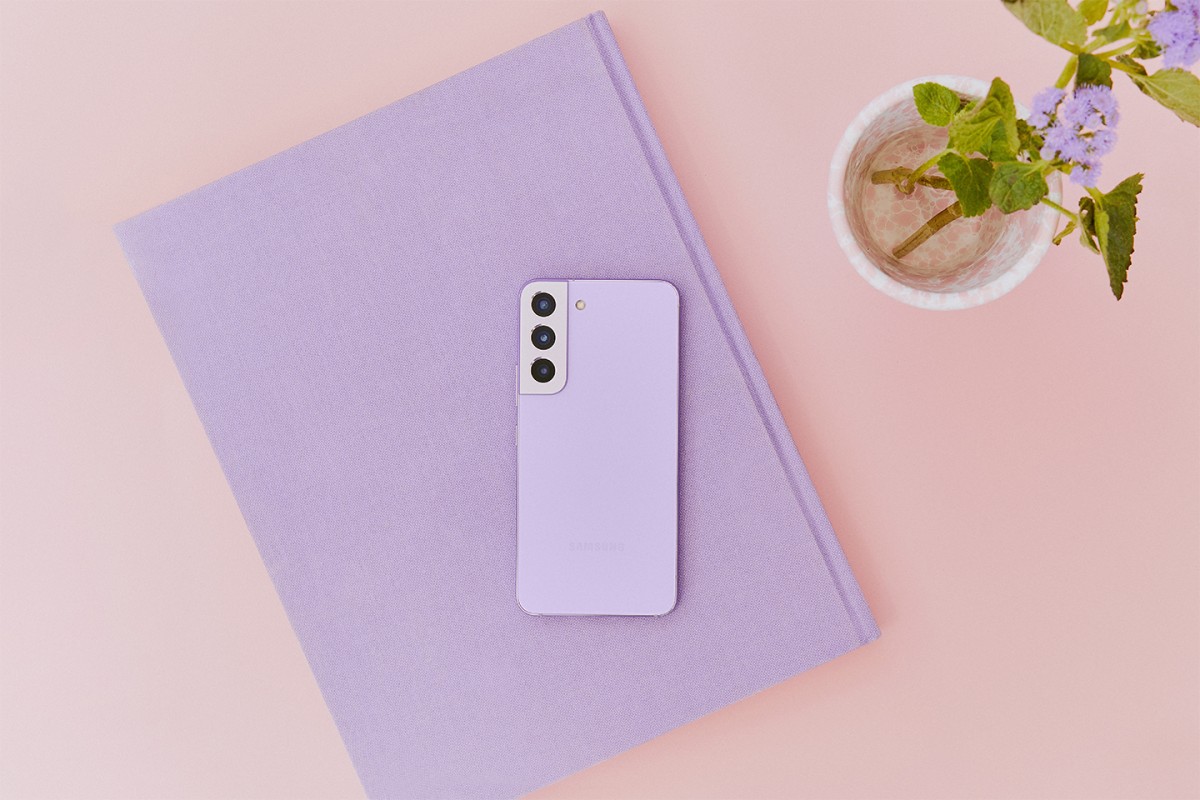 Samsung also began rolling out the first public beta of One UI 5, available to Galaxy S22 series phones in the US, Germany and South Korea. The company detailed some of the improvements brought on by the new Android 13-based system, but we expect to hear more about the software and the rollout roadmap tomorrow. 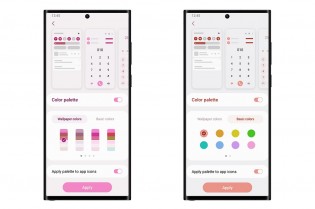 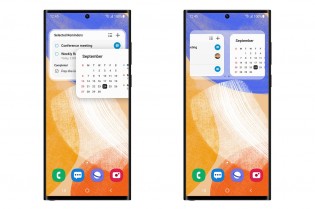 In case it wasn’t clear until now, almost everything here is unofficial information. Some of it has a high likelihood of being correct, but you should tune in tomorrow for our complete coverage of the Galaxy Unpacked event.

PS. Samsung and BTS will debut the video for Yet To Come tomorrow during the event, fans will not want to miss it.