Samsung remains the 2nd-largest tablet vendor in a declining market

The smartphone market isn’t the only one affected by the ongoing economic troubles. PC and tablets have just recorded their second quarterly decline, with global shipments falling 14% in Q2 2022. Samsung maintained its market position behind Apple.

Several causes have led to declining PC and tablet shipments in Q2 2022, such as lower consumer and educational spending, rising inflation, and COVID-related lockdowns in China. PC and tablets combined reached 105 million shipments. (via Canalys)

Tablets, in particular, have declined for the fourth quarter in a row, recording 34.8 million shipments in Q2 2022. Apple led the segment, followed by Samsung and Lenovo. 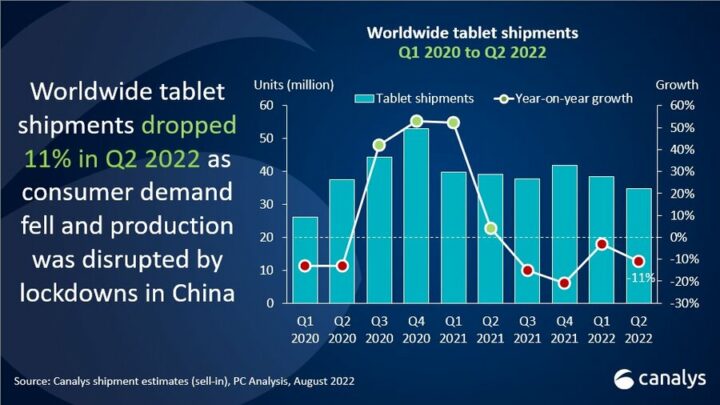 Samsung was the second-largest tablet vendor (excluding PCs) in Q2 2022 after Apple. The Korean tech giant shipped 6.95 million tablets throughout the three-month period ending June and held a market share of 20%. Last year in Q2, Samsung shipped 7.99 million tablets and accounted for 20.5% of the market.

The Korean tech giant unveiled the Galaxy Tab S8 series this year, and for the first time, it launched a large-screen Ultra model as a potential PC replacement for customers who want to turn their tablets into laptops. Samsung has the best Android tablets by far, but it still has a long way before its Tab S series can match the success of Apple’s iPad.

And lastly, Chromebooks. Unfortunately for Samsung, the company hasn’t performed well enough in this market segment to break into the list of Top 5 vendors in Q2.