Well, here’s a surprise. After more than two years of speculation around Samsung’s plans to sell a quantum dot-OLED (QD-OLED) TV (which it sort of brought to CES), it turns out that Sony is going to be the first company to market a TV based on the new hybrid display technology. The Google TV-powered Master Series A95K will come in 55- and 65-inch screen sizes when retail availability and pricing is announced in spring 2022.

QD-OLED is a holy grail of sorts when it comes to TV display technology as it merges the impressive color and brightness characteristics of quantum dots with with the perfect blacks and infinite contrast offered by an OLED TV‘s self-illuminating pixels. In theory, such a TV should be capable of exceptional brightness — something we normally associate with QLED TVs — while maintaining both the inky blacks and color accuracy that OLED is known for, while avoiding the halo or blooming effect found on non-OLED TVs. Check out our full QD-OLED explainer for more info on this novel display tech.

Does Sony’s Master Series A95K deliver on these lofty promises? It’s too soon to say as Sony is being tight-lipped when it comes to actual specifications, saying only that its new QD-OLED panel “boosts color brightness by up to 200% compared to conventional TVs.” We don’t know if Sony means LED TVs, QLED TVs, or OLED TVs when it says “conventional TVs” but it sounds like it’s trying to avoid any statements that compare QD-OLED directly to QLED or OLED models.

Instead, the company seems more focused on QD-OLED’s color capabilities. It has even given the A95K a new version of its Triluminos technology, called XR Triluminos Max, which “delivers our widest color palette and reproduces naturally beautiful shades and hues,” according to Sony.

Along with Sony’s other 2022 Bravia XR models, the A95K gets an integrated version of Sony’s new BraviaCam camera. The top-mounted camers, which has a physical privacy switch, is claimed to enable a variety of new functions. Out of the box, you’ll be able to use it for video chats via supported Google TV apps. But in time, with future firmware updates, Sony says you’ll be able to use gestures to control the TV and that the camera will even help with sound and picture optimization as it scans the room to see where people are seated relative to the TV. It will also be able to dim the panel’s brightness when it senses no one is watching, which could save some energy use.

Speaking of using sensors, the A95K sports the new Netflix Adaptive Calibrated Mode, which uses the TV’s onboard light sensors to calibrate the image quality when streaming from Netflix. It sounds a lot like Dolby Vision IQ, which is interesting because despite Sony’s support for Dolby Vision as an HDR format, it has so far declined to incorporate Dolby Vision IQ into any of its TVs. Sony also has an adaptive calibrated mode for its own streaming service, Sony Bravia Core.

When it comes to the A95K’s HDMI capabilities, Sony is no longer the laggard in the OLED TV world. You get four HDMI ports, and two of them support the HDMI 2.1 features that Sony fans have been itching for: Full 48Gbps bandwidth, 4K at 120Hz, auto low-latency mode (ALLM), and variable refresh rate (VRR). That last one — VRR — has been a particular sore spot for owners of Sony’s 2021 TVs. Sony promised VRR on those TVs via a firmware update, but so far, only a handful of the LED-based 2021 models have gotten it.

VRR will be a key benefit for Xbox and PC gamers, but the A95K will also support two PlayStation 5-specific features: Auto HDR tone mapping, which lets the PS5 detect and leverage the TV’s full HDR capabilities, and auto genre picture mode, which changes the picture mode based on whether you’re using your PS5 for gaming or streaming media.

One thing’s for certain: The A95K may not be the last word in picture quality, but the TV itself is a real looker. The panel has exceptionally thin bezels on all sides and Sony has given it a plinth-style stand with two positions. In the forward position, the visibility of the stand is minimized, while the back position lets you get the TV almost flush to a wall, without the need for a wall mount.

In keeping with Sony’s 2021 OLED models, the A95K uses Acoustic Surface Audio+, which turns the entire screen into a giant speaker thanks to two full-range drivers and two subwoofers. Also returning is Sony’s center channel sync feature that lets the TV act as a center channel speaker when connected to a compatible Sony soundbar like the HT-A7000 or HT-A5000.

Rounding out the A95K’s impressive feature set is hands-free voice control via built-in microphones, a redesigned and easy-to-clean remote that has backlighting, and a hat tip to the environment in the form of a Sony-created recycled plastic called Sorplas. According to Sony, its use of Sorplas and other plastic-reducing efforts, will result in reduced overall virgin plastic use in its TVs by “up to 60%, which equates to approximately 140,000,000 compact discs.” 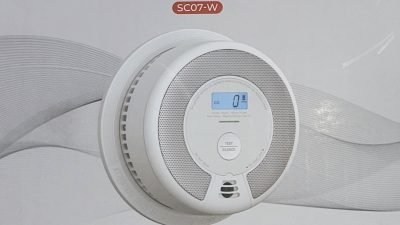