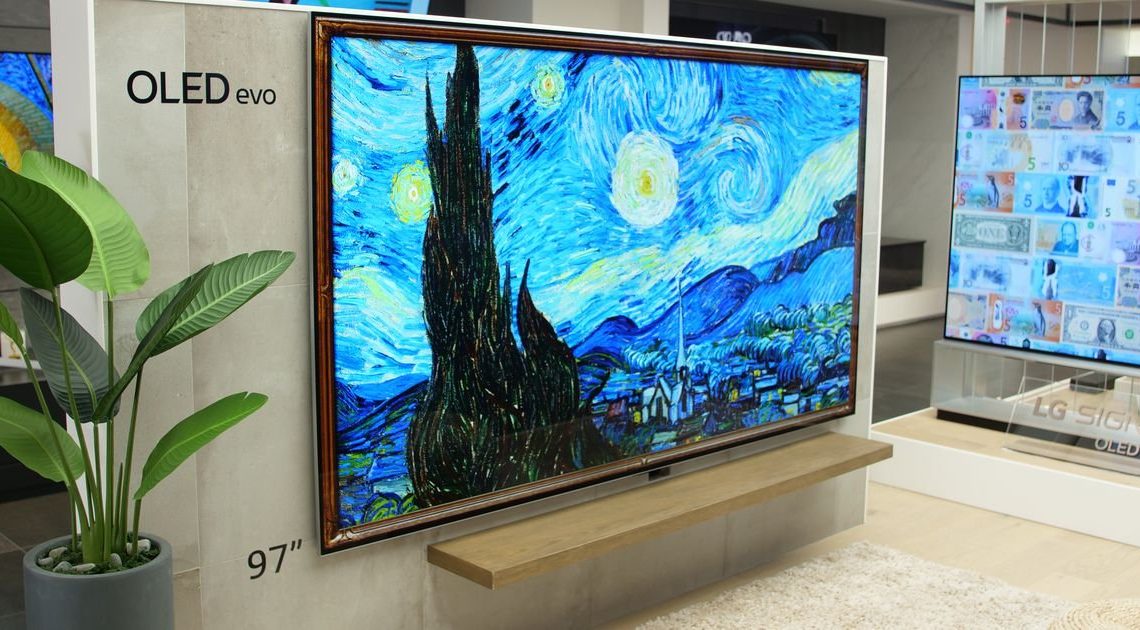 The 97-inch LG G2 pushes the OLED TV size envelope.
Richard Peterson/CNET
This story is part of CES, where CNET covers the latest news on the most incredible tech coming soon.

OLED TVs have better picture quality than the more common and less-expensive LCD-based TVs, but they’re also available in fewer different sizes. But at CES 2022, LG is closing the size gap and hoping to broaden OLED’s appeal: The massive 97-inch and relatively diminutive 42-inch versions represent the largest and smallest OLED TVs yet (unless you count early examples like the 15-inch LG EL9700 or the 11-inch Sony XEL-1).

Besting the previous OLED size champion, an 88-inch bruiser with 8K resolution that’s been on sale since 2019, the 97-inch OLED is a sight to behold. I checked it out at LG’s pre-CES showcase in New Jersey and came away convinced as ever that bigger TVs are better — and based on my quick observations, it’s perfectly detailed even though it has “only” 4K resolution.

Feast your eyes on the biggest OLED TV yet: LG’s all-new…

This behemoth is a member of LG’s G2 series, which also includes sizes from 55 to 83 inches. As such, it’s also thinner and more wall-mountable than the step-down C2 models LG introduced — as well as being 20% brighter, according to LG. If you’re keeping track, the biggest LCD-based models currently available top out at 98 inches.

The 42-inch LG C2 is the smallest OLED TV released in the last decade or so.
David Katzmaier/CNET

LG also had a 42-inch screen on display, which one-ups (one-downs?) existing 48-inch models. LG touted it as ideal for gamers and displayed it alongside the UltraGear gaming speaker, a setup that would put just about any gaming monitor to shame. Although the 42-inch OLED is a member of the C2 series it lacks the evo panel found on 55-inch and larger versions. Otherwise it’s the same, complete with best-in-class input features, including VRR and 4K/120Hz capability.