In researching types of displays that can be folded or bent, Apple is now also working on technology so iPhone displays themselves could “heal” the inevitable wear and tear.

Apple has been working on a foldable iPhone for at least five years, and it’s also investigated ones where the screen can be rolled up. In each case, the issue is of making these screens work — and not be damaged by the folding or rolling.

Now a newly-granted patent suggests a way of both minimizing damage, and of doing something about it when it happens. “Electronic Devices With Flexible Display Cover Layers,” proposes mixing rigid and flexible areas for a display, and then also utilizing what Apple calls “self-healing.”

It’s perhaps this self-healing part that is the most interesting part of the patent. Unfortunately, while there are 147 references to it in the patent’s more than 11,000 words, there is a lot of detail about what self-healing would do, and very little about how exactly it would achieve it.

“An electronic device may have a hinge that allows the device to be flexed about a bend axis,” says Apple’s patent. “A display may span the bend axis. To facilitate bending about the bend axis without damage, the display may include a display cover layer with a flexible portion.”

Apple proposes that while the display could stretch over the whole device, it may be made of three elements. Two would be regular, fixed screens, while the third would be a flexible part that connects these together.

Detail from the patent showing where a hinge could be

Apple proposes that this flexible layer may itself “include a layer of elastomer,” and this is the self-healing element. Elastomer is stretchable, but can be made to return to its original shape — an analogy would be the memory foam in certain mattresses. Typically, that ability to return to a previous shape is triggered by heat, such as body heat from a person sleeping on a mattress.

Apple proposes that, “the display cover layer… include transparent conductors that form a heating layer” to start the healing process. “The heating layer may be used to generate heat in response to user input, according to a predetermined schedule, or when the electronic device is charging,” says Apple.

The patent does attempt to cover all possible situations, so for instance it is careful to specify that this technology could be used in everything from “a computing device such as a laptop computer,” through phones, and even “a smaller device such as a wrist-watch device, a pendant device, a wearable or miniature device of other types.”

It also says that the display could be in this configuration of two rigid elements with a flexible one in between, but it could also be a single display. In all of the descriptions, though, the idea is that the display would be made up of multiple layers.

“[It] may have an outermost layer formed from clear glass, transparent plastic, sapphire, or other transparent materials that serve as a protective layer for thin-film transistor circuitry and other display structures,” says Apple. “The outer display layer may sometimes be referred to as a display cover layer.” 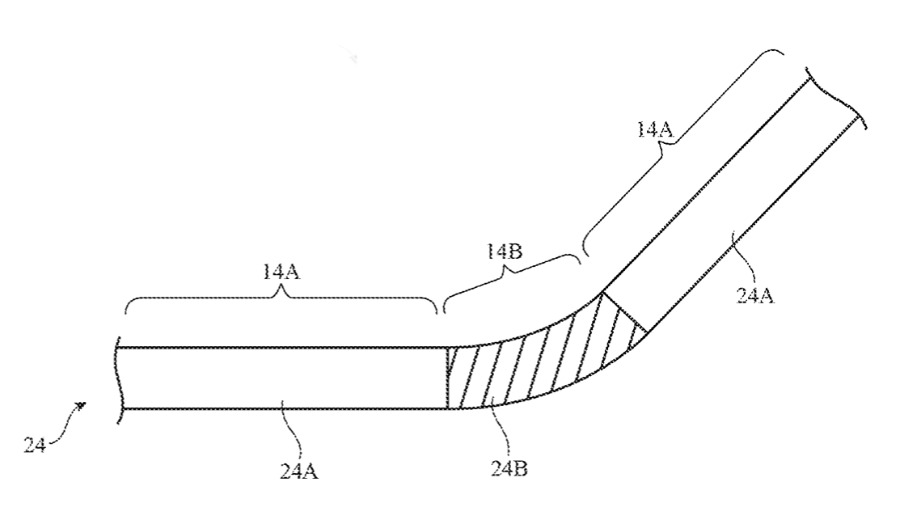 Some layers would act as the actual display, while others would be there to protect that screen — and particularly so when it’s being bent. “[A] device may be folded (bent by 180 degrees or other suitable amount) about bend axis,” continues Apple, “so that display is visible from the outside of device in its folded state.”

This patent is credited to eight inventors. They include Hoon Sik Kim and Paul S. Drzaic, both of whom have previously been granted a related patent regarding how a folded iPhone could display notifications while shut.